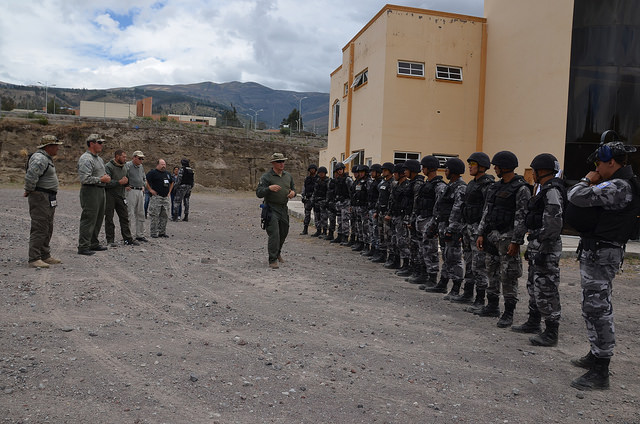 PORTAGE — More than 40 men and women who help make society a safer place were the focus of attention Sunday at Berean Baptist Church.

Thirteen law-enforcement departments, including seven members from Costa Rica’s National Police Force, were represented during the morning worship overseen by Pastor Steve Nichols. Afterward, the officers were the guests of honor at a churchwide luncheon.

Nichols said every Sunday service is special, but this one was unique in its own way.

“Police officers, because of their line of work and the potential dangers they may face every day, need every source of protection they can get,” Nichols said. “Those here today came on their own, they came because of their faith and belief in Christ.”

The focus of Sunday’s service and recognition was the result of the efforts of former Kalamazoo Department of Public Safety Sgt. Ryan Rought.

Since December 2006, the 36-year-old Rought and his wife and two children have lived in Costa Rica after becoming missionaries through the Association of Baptists for World Evangelism. The Harrisburg, Pa.,-based independent mission agency draws people from all walks of life, and Rought was able to parlay his religious convictions with his military and law-enforcement experience to earn a respected place in Costa Rica’s 9,000-member National Police Force — and still effectively spread the gospel.

For a one-week period three times a year, Rought conducts training exercises in special weapons and tactics for a group of about 80 members of Costa Rica’s National Police Force.

He said he wanted to do something different for this month’s training by bringing seven of the members to Kalamazoo.

The seven joined tactical officers from the Kalamazoo Department of Public Safety for a weeklong SWAT training session that concluded Friday on the 8,000-acre wooded property at Fort Custer Training Center in Augusta.

The seven Costa Rica officers — five from its SWAT team, and one each from its criminal investigations and airport authority units — were chosen for the one-week training in the United States not only for their outstanding work in the force but also because of their strong religious beliefs.

Nichols said he has enjoyed spending time with the seven and is impressed with their religious devotion.

“I look at these seven commando guys esteemed in their (occupational) position who look death in the face every day and it’s clear that Christianity is not for sissies,” he said.

Rought said the law-enforcement personnel who attended are strong believers in Christ that he has worked with or befriended at some point in his career.

“I made calls when we got back to Michigan a few weeks ago to let these Christian brothers and sisters know what the church was offering to do for us,” he said. “I’m not surprised so many showed up … It’s great, and this was a first-class service here today.”